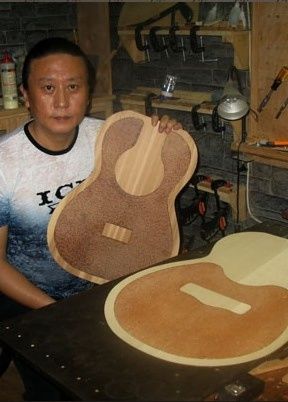 Yulong Guo is without question China's premier luthier, specializing in the construction of world-class double-top classical guitars. Over 90% of the cost of a hand-made concert classical guitar is labor. Because of this, Mr. Guo's guitars sell for only a fraction of the price you would expect to pay for luthier-made guitars of similar quality and sound. The soundboard of the Yulong Guo double-top guitars is similar to the one invented by Matthias Dammann in Germany in the late 1980s. The top consists of two super thin layers of wood, with a Nomex honeycombed structure between the tops. The result of two resonating tops, instead of one, is increased volume, sustain, and beauty of tone.